Elections do matter! It is crucial for us to engage with candidates and vote at this Council 2020 election so that residents get the representation they need.

A Virtual Town Hall ‘Meet the Candidates’ hosted by Rod Quantock took place on the 29th, 30th of September and 1st October where candidates answered your questions. These events were held in partnership with the FRA and Yarra Residents Collective and recorded live each evening. Please see the below links to each ward’s recorded video via YouTube. (If you need a reminder as to which ward you reside in, see the Yarra City Council website here under ‘Our Wards’)

How candidates in Nicholls and Langridge Wards responded to the FRA Survey?

The FRA submitted 10 questions to all Langridge and Nicholls Ward candidates. The questions covered their reasons for nominating, experience, issues and responses to key FRA priorities (determined through the 2020 FRA members survey). The answers to the questions we trust will assist you in casting your vote.

The FRA has responded to each stage of consultation in the review of the fourteen-year old Yarra’s Open Space Strategy over the last two and a half years.
The three response documents are listed below.
The FRA recommends against adopting the whole of the draft strategy at Council’s 1 September 2020 meeting and recommends three points be progressed in addition to Council’s own resolution of 18 August 2020.
Please read the submissions listed below:
31st August 2020
12th March 2020
18th March 2018

The FRA fully support the draft Yarra Homelessness Strategy being considered at the 18th of August 2020 Council Meeting. The proposed strategy is compassionate, intelligent and well researched.

The World Heritage Management Plan provides information on the World Heritage, National Heritage, State Heritage and Local Heritage values of the Royal Exhibition Building and Carlton Gardens. It also provides detail on the statutory and management framework that will ensure these values are protected and conserved. This is the first time since the World Heritage citation in 2004 and the preparation of the current set of plans, that a review has been undertaken. The review is therefore very important for the future of the World Heritage site and also for the protection of the remaining heritage and living history that characterises the areas in the EA and surrounds. It is therefore a rare opportunity for all in the community, to have our say.

The Fitzroy Residents’ Association has responded to the Draft Yarra Open Space Strategy. The strategy provides an important part of the jigsaw to deliver a liveable, equitable and sustainable City of Yarra. Read it here

The Fitzroy Residents’ Association is concerned at the impact of the proposed building at 84-104 Johnston Street, Fitzroy (opposite Coles Supermarket) and prepared an Objection which was submitted to the Yarra City Council. Read the objection here… 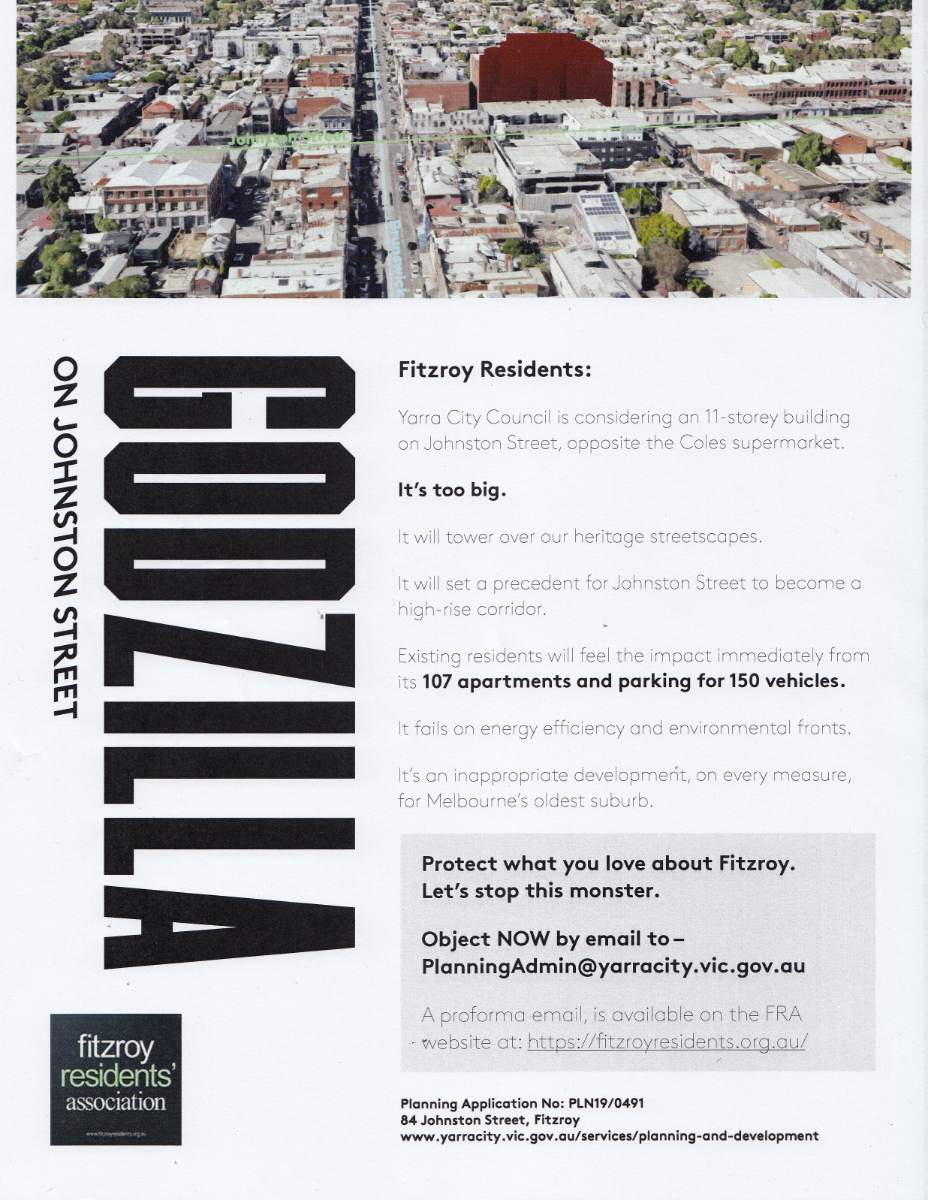 In December 2019, the Yarra City Council developed a draft Climate Emergency Plan, and asked the local community for their say on it.

The Fitzroy Residents’ Association welcomed the opportunity to respond to the Yarra City Council’s initiative to declare a climate emergency and propose a set of policies to drive the City toward achievable and necessary outcomes to meet that emergency.

Please have a read of the FRA Response to Climate Emergency here.

Planning, protecting and building a suburb for all

In the latter part of 2016, FRA was actively involved with a number of resident groups in the City of Yarra to seek planning reform and improve heritage protection to achieve our objective: to keep Fitzroy liveable.

As part of the Yarra Residents’ Coalition, we hosted a packed town hall meeting on 17 November 2016 to hear residents’ views on over-development in the City of Yarra. All motions were fully supported by those who attended, and the resolutions were submitted to Council for its meeting on 22 November . (See Council minutes)

Subsequently in March 2017 the Mayor of Yarra, Cr Amanda Stone, led a delegation of representatives of the Coalition to meet the Hon Richard Wynne, Minister for Planning, to discuss the resolutions. Whilst there have been developments, such as the release of Plan Melbourne 2017-2050 since the initial November meeting, the resolutions remain largely unfulfilled.  The Coalition reported on its efforts to achieve planning reform at a further town hall meeting in April 2017.

In June 2017 we joined with other resident groups across Melbourne to seek planning reforms. We have continued to be involved in various activities and forums to represent residents’ concerns about over-development in our suburb.

Updates on our activities are included in our newsletter.  Contact us if you wish to be on our distribution list.

FRA meetings are an opportunity to discuss planning issues, and in some cases residents may wish to object to particular developments.  The City of Yarra website provides some information to assist objectors.  See also www.dtpli.vic.gov.au/planning/planning-applications

National Trust Advocacy Kit
The National Trust of Australia has produced a free online resource to support those who want to advocate for the protection of places of cultural heritage. This is a welcome resource and includes, for example, an advocacy guide for people who may be wanting to object to an Application for a Planning Permit for properties covered by a Heritage Overlay.

Can we live in a ‘Night-time Economy’?
Fitzroy is the epicentre of the night-time economy in the City of Yarra with Smith, Brunswick, Johnston and Gertrude streets. We are also the suburb that is experiencing a high growth in residential apartments in close proximity to the activity centres that are the collective spines of Fitzroy. The impact of the night-time economy is of concern to many residents. The increasing number of bars and clubs and the expansion of existing establishments with additional patrons is affecting the well-being, safety and amenity of residents. The late night and early morning trading, together with a lack of diversity in our activity centres, is threatening their vitality, safety and function.

The adoption of Amendment C209 into the Yarra Planning Scheme in 2018 allows for licensed premises with a capacity of more than 200 patrons to be located in core entertainment precincts including Brunswick, Smith and Gertrude streets. Understandably there continues to be a high level of concern, disquiet and uncertainty across our residential community given recent planning approvals by the Council.

FRA has been active in a number of cases involving licensed premises and have advocated on behalf of residents.

Community graffiti management trials
In July 2018 the City of Yarra initiated a community graffiti trial project in selected neighbourhoods across the city to initiate and evaluate action on graffiti, waste and litter. FRA is participating in one area.

FRA has also made submissions to the City of Yarra to review its Graffiti Management Framework.

Updates will be included in our regular newsletters.